Actors and Others for Animals by Connie Vines #Sunday Snippets

Like many of us, I love animals.  I also participate in local community events to benefit children, animals, and to promote literacy.  One such event was held on October 17th.
The Grove Theatre (donated venue and stage crew) held an evening of entertainment, "Upland's Got Talent, A Furry Fun-Raiser," hosted by Jo Anne Worley and Fred Willard. Ms. Worley, Rowan and Martin's "Laugh-In", is the Singing President of Actors & Others.
JoAnne Worley’s instinctive comedic timing and irrepressible laugh, and stage presence impressive. She, as well as the other members (actors and others) donate their time.  Local vendors donate baskets filled with goodies, gift-cards, and expensive recording and video equipment for the raffle items.  The event included a wine and cheese pre-party.  While the billboard poster and the marquee promised lots of laughs, singing, dancing, surprises and magic! 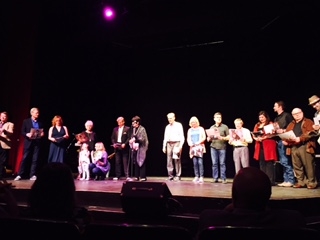 I had a wonderful evening.  The pre-party was awash with laughter, lively discussions, and enthusiast introductions.   JoAnne Worley spent time interacting with the audience and selling raffle tickets from a woven basket.   After she opened the show, we were treated with Michael Skrzek, tap-dancer on Broadway, recreated Gene Kelly’s fancy foot work in the movie,  “Singing in the Rain”.  Jay Johnson & friends (Tony Award-Winning Duo), Fred Willard and his Sketch Comedy Troupe The MOHO’s, Sherry Kinison and many others gave standing-ovation performances.
While I belong to this non-profit origination, you may find a similar organization in your local community.
About Actors & Others
So, what exactly is, “Actors and Others for Animals’?  We all know Betty White has supported this non-profit agency for decades. How did it begin?
Date:  1971 .  Place:  On one of Los Angeles’ busy freeways. The late actor Richard Basehart and his wife, Diana, watched in horror, as someone in the car ahead of them tossed a dog out of the car window to a grisly death. Both Richard and Diana were animal lovers and very aware of the daily cruelties that so many animals endured. Their shock and outrage that day motivated them to gather fellow actors and members of the community together to work to stop such inhumane treatment.
In 1971, our objectives were to provide proper care for and prevent the inhumane treatment and destruction of animals. The common belief of the day was to simply rescue and adopt. Then branched out into other services (including obtain assistance with vet. bills). By 1979, the services were provided throughout California.
To find out more about Actors & Others, click http://www.actorsandothers.com/


Do you have a charity dear to your heart?

Drop  comment or two and tell me about the good-works being done in your city or neighborhood.

Remember to visit the other excellent writers participating in this week's Sunday Snippet Blog Hop.

BTW:  Visit one of my links to purchase one of my novels!